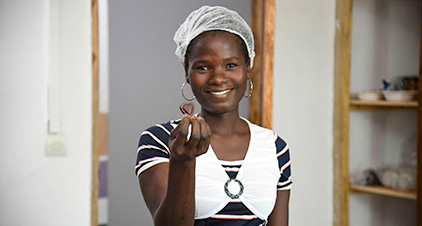 Recently, the first bean-to-bar chocolate bars from the ETG-supported Cocoa Fruit Lab in Ivory Coast reached the European market. Each bar comes with a personal story of the farmers who produced the beans.

The initiative is empowering women to become the producers and marketers of their own cocoa products, shifting value-addition processes to origin countries. Bringing together actors from across the cocoa sector, this project has created the first entirely women-owned micro-factory in Ivory Coast to produce sustainable cocoa, specialty chocolate and cocoa juice.

While Ivory Coast is the world's largest cocoa producing country, most cocoa farmers are struggling to reach a living income. This in particularly concerns women, who often own smaller farmlands, have less access to trainings and financial inputs, and lack household decision making power compared to their male counterparts.

By increasing women’s participation in the sector as cocoa producers, juice collectors and chocolate makers, the Cocoa Fruit Lab promotes female entrepreneurship across the supply chain. It also takes it one step further, creating opportunities for female farmers to improve the quality of their cocoa beans and to access higher-paying specialty markets.

Finally, the project introduces an income-diversification aspect at the farmer level through the collection of cocoa juice. When chocolate is produced, the white pulp that surrounds the cocoa beans is usually lost as a waste product, but collecting it and processing it into juice can create an additional income stream for minimal additional cost, raising farmers’ incomes by up to 30% per kilo of cocoa beans.

The 400 farmers from the women-run cooperative COVIMA in Ivory Coast’s Marahoue region have been the first group to participate in this project, but multiple partners are involved.

The Cocoa Fruit Lab is an initiative of ETG’s sustainability foundation Beyond Beans and is co-funded by IDH: The Sustainable Trade Initiative, as part of their Cocoa Origins Program. Also involved are women-empowerment focused Fine or Flavour chocolatier Rokbar, and cocoa juice company Kumasi. Technical support is provided by juice experts from Koa and advice on process and quality by Döhler Holland.

Rokbar has a track record of successfully integrating gender approaches in the cocoa chain and supporting women-owned chocolate production, and cocoa juice startup Kumasi have built up a successful juice production strategy. Rokbar and Kumasi are not only making this project possible on the ground, but are also supporting COVIMA in finding local and international markets for their future products. ETG-Beyond Beans has already been working with the COVIMA cooperative for 5 years, implementing a variety of women-empowerment focused initiatives, and therefore has a strong existing relationship.

In its first year of operation, the Cocoa Fruit Lab will produce 'cocoa of excellence' for 2,000 single origin Rokbar chocolate bars, 1,000 litres of cocoa juice, and 250 Mt of sustainable cocoa beans for European chocolate factories, all while supporting women in developing as local entrepreneurs.

After the first chocolate-making workshops she was involved in, Zouzou N'Guessan Helene remarked that commercializing chocolate from her own cocoa beans was "an out of this world experience."

To try the new bars, head to www.rokbar.nl/products 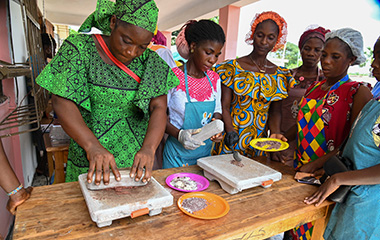 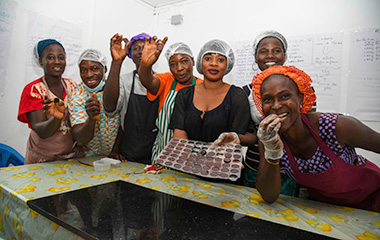 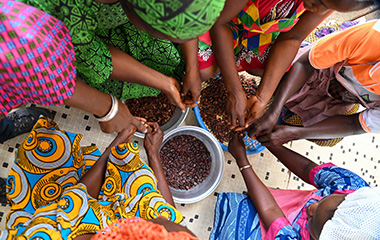