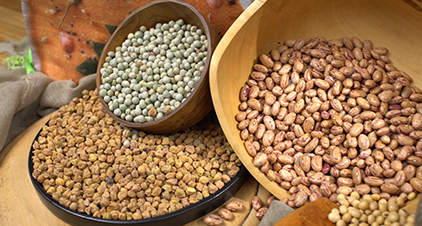 New Delhi, India — IFC, a member of the World Bank Group, is providing a loan of INR 1,600 million (c.US$ 21 million) to ETC Agro Processing (India) Private Limited (“ETG India”), one of the country’s largest processors and marketers of pulses. The aim is to support the company’s expansion plans, which will boost farmers’ income and strengthen India’s agribusiness sector, thereby contributing to the nation’s food safety and security.

India is the largest producer and consumer of pulses globally. While the country’s pulse consumption is steadily rising, nearly 90 percent of the pulse-growing regions rely on natural rainfall for cultivation. In this context, several factors, including groundwater depletion and land degradation, pose major threats to India’s agricultural sustainability. In addition, the sector is characterized by high volatility in commodity prices, as witnessed in the last few years. Collectively, these components led to pulses being a less than favorable choice crop for farmers (second to crops such as rice, wheat or sugarcane that yield a stable income for farmers)

Against this backdrop, IFC’s support will contribute to ETG India’s expansion of its processing capacity, enabling the company to procure more pulses from an incremental 30,000 farmers in the company’s supply chain. This in turn will create stable and sustainable income for farmers and thus helping the country become self-sufficient in proteins. Most importantly, IFC’s assistance will bridge the gap in providing safe, hygienic, affordable, and protein-rich food for Indian consumers. The project will also improve the competitiveness and operating standards of third-party processors, enhancing their overall capacity to serve broader processing needs in the market.

“IFC’s longer-term funding comes at a vital time when the economy has slowed down, awaiting recovery. . IFC’s support, which will account for a third of the company’s working capital needs, will enable ETG India to ramp-up its new processing plant and integrate upstream Farm Gate initiates into modern supply chain,” said Parag Gadre, CEO, ETG India.

The IFC investment is expected to meet the company’s incremental working capital needs and reinforce environmental and social (E&S) guidelines in line with IFC’s Performance Standards. In addition, as ETG India adapts its business model to include domestic supply chains and third-party processors, IFC will help the company develop a strong environmental and social action plan for such third party processors.

“Almost half of India’s labor force is employed in agriculture, and over 80 percent of farmers are considered smallholders. Improving the livelihoods of these farmers will be key to strengthening India’s agribusiness sector. With this in mind, IFC prioritizes interventions to increase agricultural productivity and boost income opportunities for the rural population,” IFC commented.

“In sync with the government of India’s efforts, this financing package will contribute to increased procurement of pulses from farmers, creating new jobs and strengthening the pulses supply chain in India. Subsequently, this will increase the availability of safe, hygienic and nutritious food, supporting the country’s food security agenda.”

IFC—a sister organization of the World Bank and member of the World Bank Group—is the largest global development institution focused on the private sector in emerging markets. We work in more than 100 countries, using our capital, expertise, and influence to create markets and opportunities in developing countries. In fiscal year 2019, we invested more than $19 billion in private companies and financial institutions in developing countries, leveraging the power of the private sector to end extreme poverty and boost shared prosperity. For more information, visit www.ifc.org.

ETG Agro India, through its enterprise ETC Agro Processing India Pvt. Ltd., is one of the largest processors and marketers in the pulses processing industry. Stakeholders such as farmers, institutional buyers and the government form an integral part of the ETG network. From its ISO certified plants in Maharashtra, Gujarat, and West Bengal, with processing capacity of over 500,000 MT per annum, ETG India distributes processed pulses pan India through a distribution channel of over 3000 trade partners. The key products processed from ETG India plants include Pigeon peas, Red lentils, Yellow Pea and Chickpeas.