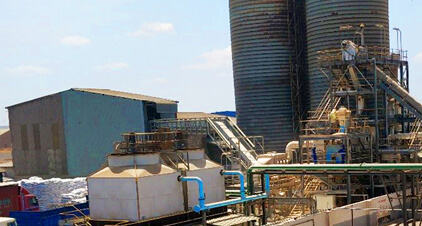 Zamanita plant was officially re-commissioned at a gala event that welcomed esteemed guests, including his Excellency, the President of Zambia, Dr. Edgar Lungu.

Since commencement of operations in 2012, ETG Parrogate has emerged as market leader in cotton ginning and lint exports. Through direct procurement from small scale farmers, the company creates a multitude of direct and indirect job opportunities in Zambia. The success of the company lies in its commitment to investing in the best and most qualified human resources, hard work, ambition, integrity, accountability and its practical approach to business.

Leveraging its strength in procurement and a deep understanding of the Zambian market, the company took a strategic decision to diversify their basket of products to include cooking oil and erected a 40 TPD (tons per day) refinery at Mwembeshi, 40 Kms west of Lusaka. In 2017, the company invested in a Soybean Solvent plant with a through put capacity of 200 TPD. Today, Zamgold, the company’s flagship soy oil brand, is recognized as one of the most reputed brands in the country.

ETG Parrogate is passionate about driving economic growth in Africa and the company’s vision is to be a key partner in the continent’s, and Zambia’s, development. Despite the fact that the edible oil industry is facing immense challenges, ETG group saw an opportunity and strategic advantage in acquiring Zamanita. Zamanita is known as one of the most respected and trusted brands in Zambia. In 2007, after Zambeef took over the business, the name was changed to Zamanita.

Cargill acquired the business in 2015 and after three years of trading, found it unviable and announced cease of all operations in October 2018. The decision was based on a plethora of problems, ranging from lopsided policies allowing rampant smuggling of cooking oil into Zambia, high cost structures, and inefficient factory operations.

ETG Parrogate FZC successfully completed acquisition of Zamanita’s assets, business and brands and recommenced processing in August 2019. This acquisition resulted in salvaging hundreds of jobs which were lost as a result of the shutdown. In addition to salvaging hundreds of jobs, this acquisition has increased crushing capacity to ~600 TPD and Refinery capacity to ~200 TPD. To further augment our footprint in the country’s cooking oil market, the company is setting up a Palm oil Fractionation plant with a through put capacity of 100 TPD.

In the crush and cooking oil industry, profitability is largely determined by the company’s ability to procure the right quantity of raw commodities at the right price. Through the efforts of our cotton procurement team, we are sourcing 85% of our soybean requirement from small scale farmers. By selling directly to ETG, farmers receive the optimal price for their produce by cutting out intermediaries.

With optimal cost structures, procurement strength, loyal customer base and deep understanding of African markets, we believe our strategic move shall result in a win-win scenario for all stakeholders.